Beyond the Baton: Eímear Noone

Galway-born conductor and composer Eímear Noone has taken the global sphere of game music by storm with her inspirational musical reimaginings of the worlds of Zelda, World of WarCraft, and Diablo, to name but a few.

As a vibrant champion of orchestral music Eímear is also respected for her work in the genres of Classical Music, feature films, TV, and commercials. We catch up with the enchanting maestro in LA, in the aftermath of her exceedingly successful appearance at the recent iDIG Festival in Dublin.

My love for classical music was so instantaneous. It was a very natural love affair from the outset."

What were the sounds of your childhood?

I grew up in a household that listened to Thin Lizzy, the Beatles and traditional Irish music. Classical music wasn’t something that was in the family home, but I’ve a visceral memory of seeing an orchestra on TV at about 7 years of age and straight away thinking “oh yeah, I’m going to do that…that’s just the most beautiful thing I’ve ever seen!” My love for classical music was so instantaneous. It was a very natural love affair from the outset.

Tell us about your early instrumental studies.

I studied piano but I have very bad hands — they’re double-jointed — so when I was about 10 years of age I started playing concert flute and ended up studying with Ciarán O’Connell at the DIT Conservatory of Music and Drama for 8 years, and completing my flute and piano diplomas. Then I went to Trinity College Dublin for my music degree.

Why did you decide to pursue music in Trinity?

I knew from a very young age that I would leave Ireland…that I was destined to go, but I made a pact with my parents that if I were to study music I would study at a university rather than a conservatory. Since I did not come from a family of professional musicians it seemed like a precarious option to them. So, the agreement was that I would study at a university where there were other disciplines running alongside mine, so Trinity was the perfect option. It seemed to give a good academic grounding for what I wanted to do — compose and conduct.

Why did you set up the Dublin City Orchestra?

The big thing for a young conductor is that it is so difficult to get opportunities to actually conduct. I remember in first year at Trinity there was a doctoral student over from the US who was involved in early Renaissance performance practice. He had to organise a lot of groups so I ended up following him around like a puppy asking “can I help?”, “can I help?”. He said “I don’t have enough time to do the early Renaissance choir — do you want to conduct it?” I jumped at the chance.

I had been conducing since I was 15, mostly school orchestra and helping out as assistant director here and there, and often just in my bedroom reading scores or watching conductors on TV trying to figure out what they were doing. I just knew so early on that this was what I wanted to do.

After my second year at Trinity there were no more opportunities to conduct so I had to do something about it. My classmate, Gillian Saunders, and I decided to set up our own orchestra made up of a bunch of friends of ours from Trinity, UCD, the Royal Irish Academy of Music, and Maynooth — all colleges within the Dublin circle — and create an orchestra that would bridge the gap between youth orchestras and professional orchestras. We were passionate about bringing our families and friends into classical music through the pop classics route. Every programme we did was a mixture of classical repertoire and film music, or pieces similar to that. We were really passionate about opening up this incredible music machine (the symphony orchestra) to people who had seen it as something that wasn’t for them, or elitist, or not belonging to them, and saying here’s two very unassuming, unthreatening girls doing this…it’s our music so why can’t it be your music?!!!

Did your college studies prepare you in any way for the musical world in which you now inhabit?

It definitely prepared me in terms of performance practice, interpretation and analysis — the things that are very esoteric and academic. While it prepared me intellectually, it didn’t prepare me practically. It didn’t help me get a job. There was no after care whatsoever. It was education for education’s sake. I believe in having the creative vocabulary, the technical skills to express oneself, to express the intellectual ideas that I had garnered and cultivated in Trinity. I couldn’t express them unless I sought that mode of expression elsewhere. And that for me came through my conducting studies and my practical application of the compositional techniques I had learned there. I had a wonderful time studying composition with Donnacha Dennehy in Trinity. He was a marvelous mentor. We also have Martin Adams there — he’s a world authority on Henry Purcell. He is a musical oracle…he’s absolutely marvelous. I was surrounded by excellent students at Trinity, but it was definitely intellectually challenging. 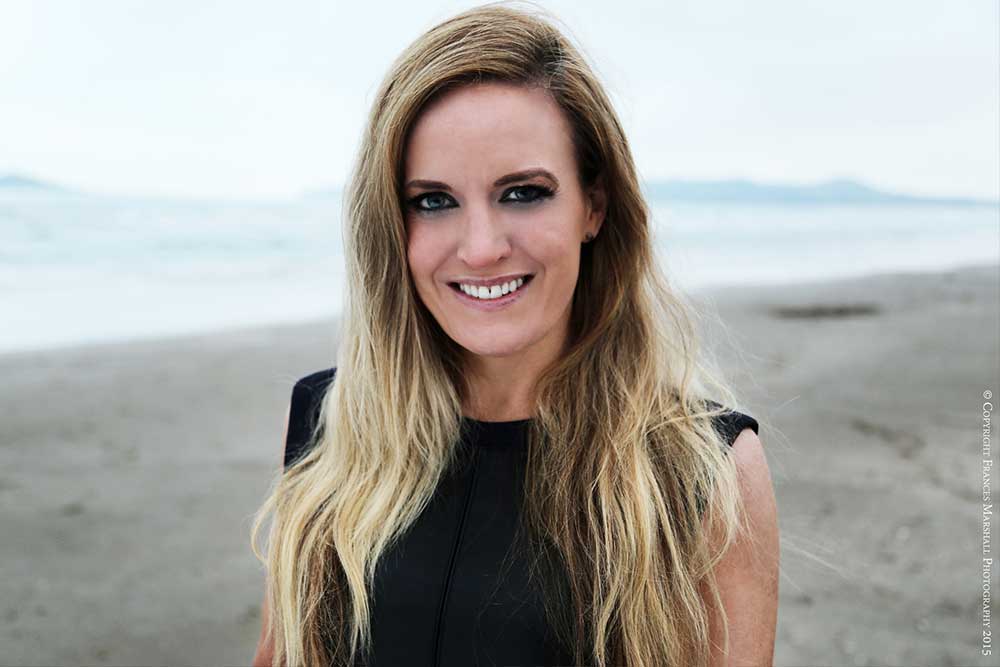 While in LA I got a job conducting for the LA ballet, so my career has been this crazy, multi-genre, kaleidoscopic adventure really."

How did the move to Los Angeles come about?

I’m a big music fan, and I really wanted to be involved in both pop culture and classical music. The only place that I could do both at a world-class level was Los Angeles. Screen Training Ireland brought over a big LA orchestrator, so on the strength of my work on their course I was hired as his assistant and headed over to LA. The first job I worked on was this tiny little video game that nobody was sure of…when I came into the studio and saw the cinematics on the screen I thought: “Oh My God this is something special!” It was the first World of Warcraft which has since had over a hundred million individual players!!!

While in LA I got a job conducting for the LA ballet, so my career has been this crazy, multi-genre, kaleidoscopic adventure really. And that’s what I always intended it to be!

Do you miss Ireland?

How would you describe your composition process?

The process is always different for me. The ideas can come from many different places. This helps me because that suits my personality. When I hear an idea in my mind, I hear it almost fully orchestrated, unless I’m doing an arrangement of something I’ve already created. If it’s for film I’ll be thinking in one set of colours, and try not to step on dialogue and things like that. The sonic identity that’s become known as the ‘game music’ genre is very expansive. More is more…the bigger the better…with giant brass sections. When we’re recording we often have 8 French Horns in the orchestra! The bottom of the brass will be at least 3 tenor trombones, and at least 2 bass trombones, at least 1 chimbasso if not 2, and 1 or 2 tubas. We take it from there and balance everything else up.

When working on film your budgetary constraints dictate the orchestration. For me it does, because I don’t like to work in MIDI. I love to work with live instruments, so I’d rather have a chamber sound for a whole score and be creative with a small group of instruments than write a MIDI score. I need to see the human beings playing the notes I’m writing in my mind’s eye. When I’m orchestrating I see the bowing…I see the brass section breathing…I see it all as if it’s happening — so that’s my process. It’s very messy but I like it that way. When it gets to the orchestration process, it’s not messy, it’s very much more streamlined. Conducting gives me a unique perspective of composition. It all works together for me.

What do you bring to the conductor’s podium?

A red pencil and a baton!

As a conductor how do you deal with answering the constant ‘women in classical music’ question?

Well, I do say this: “A stick of Rosewood isn’t particularly heavy so what’s your point”? 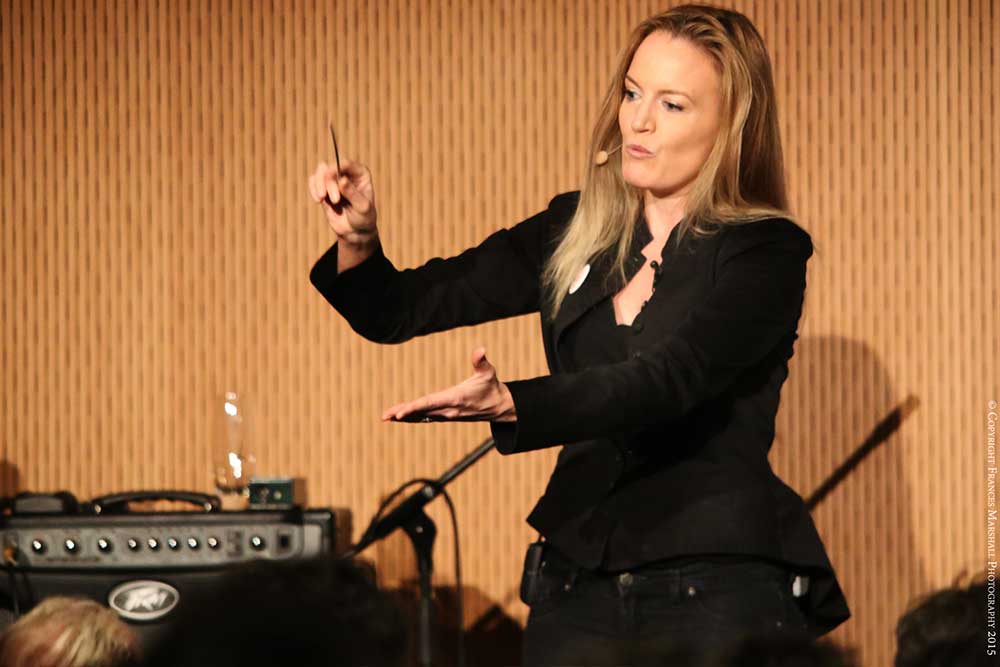 What are your thoughts on the title ‘Ireland’s Queen of Game Music’?

Well first of all the title ‘Ireland’s Queen’ of anything has to be good [laughs]. When I was in college the career in video game music just didn’t exist, so as a pure classical musician it’s kind of funny. At the same time, I’m so thrilled that the gamer audience loves the orchestra the way I do. It’s astonishing to me. It’s important to note that at this point in music history, there are more people listening to orchestral music now, listening to the sonority of the orchestra for hours every week — this has never happened before…we’re talking millions of people!!!

How has Ireland reacted to the world of game music?

I’ve had so many lovely letters from people thanking us and hoping that the event will happen again. We had a great turnout for our first year at the iDIG Music Fest. We brought over the best and the brightest from LA — the standard of music making was fabulous. We had the National Youth Orchestra with Frank McNamara playing piano in the middle of them, J.J. McNamara playing some Liszt/Rachmaninoff-influenced arrangements of game music, and it was just amazing. One of the great surprises was the DIT Traditional Music Ensemble who wrote some fantastic arrangements. The musicians of the National Youth Orchestra — I was so proud of them, and to be an Irish musician in front of my American colleagues.

We’re doing it again in 2016. The Irish talent was undeniable and the audience absolutely loved it.

Is there any particular classical repertoire that you would like to sink your teeth into in the future?

Yeah, always! I’m a massive Stravinsky fan. I’ve done a lot of his works. I just did Firebird and I’m doing the Rite of Spring this year. I would love to do a piece by Lili Boulanger called Faust et Hélène which won the Grand Prix de Rome when she competed. It’s an amazingly brilliant piece. Some Richard Strauss as well…I really would love to do Mahler 5 — those are some of my goals for the next 2 years. 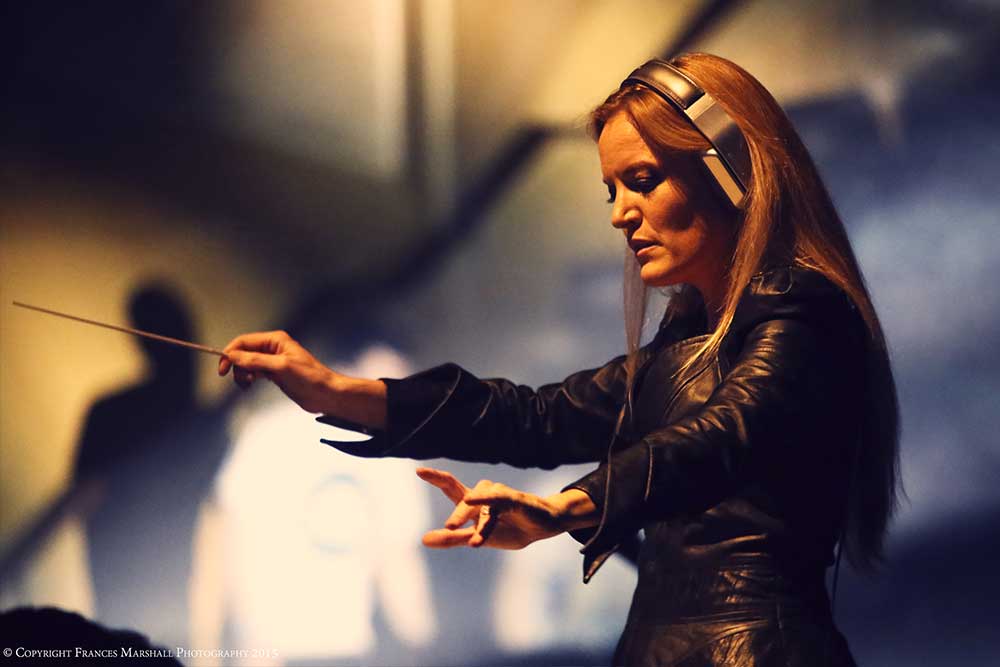 What would you consider career highlights so far?

Conducting the Philadelphia Orchestra…The Royal Philharmonic…Working with the National Symphony Orchestra US…Zelda Symphony at the Sydney Opera House — that was wonderful. I love doing Electronic Opus for BT, and Gladys Knight was really fun. All the Blizzard stuff is super. Recording in LA and at the Skywalker Ranch are always highlights for me. Abbey Road is always cool.

What do you enjoy most about your life in LA?

I like the proximity of musical artists across all genres. I’ve learned so much about rhythm from great Jazz and R&B musicians…from world musicians…and that’s what I love about here. If you’re a huge music fan and like me, you want to cross genres, then LA is a really great place to be.