“The Man with the Baguette”: Paul Daniel

Lauded as an innovative and visionary conductor, Paul Daniel CBE is one of the leading maestros of his generation.

As a recording artist, Daniel has received critical commendation for numerous projects with Chandos, Deutsche Grammophon, EMI, Linn and Aeon, but his interpretation of the complete orchestral works of William Walton on the Naxos label earned him particular acclaim. Resultantly, he was selected to lead Naxos’ 2000th release—the first budget-price recording of Anthony Payne’s completion of Elgar’s Third Symphony, with the Bournemouth Symphony Orchestra.

Final Note caught up with the busy conductor in Montpellier to get some insight into the psychology behind his art, challenging times at the ENO, the appeal of a nomadic life, that Vivienne Westwood coat, and his work with the Orchestre National Bordeaux Aquitaine.

...I saw the job of the man with the baguette as being very seductive! I was nine years old when I told my aunt that I would be a chef d'orchestre."

As a chorister of Coventry Cathedral, what was your first impression of the world of classical music?

I arrived in a kind of hothouse of music making: the Cathedral in Coventry was very new—built as a symbol of world reconciliation in the 1960s. Every week there was new music, commands, visiting orchestras, jazz and rock groups (and the legendary ‘Tangerine Dream’ one year!), so it was very eclectic. The War Requiem was only one of several world premieres written for the new Cathedral. To be surrounded by all this fever of music making was an extraordinary start for a seven-year old.

When did the impetus to train as a conductor present itself to you?

I was lucky to go to many orchestra concerts: in my family we didn’t have that tradition or habit, so the orchestras visiting the Cathedral were a new world. Berlin Philharmonic…all the big English orchestras…they all came. And I saw the job of the man with the baguette as being very seductive! I was nine years old when I told my aunt that I would be a chef d’orchestre.

How did your studies with Sir Adrian Boult and Sir Edward Downes define your early style, and how has this evolved over the years?

Sir Adrian Boult had a huge experience and he was very generous in passing it on to a young fool like me. He took great care to prepare every meeting; he collected his scores to show me, and never wanted any payment! Edward Downes was the director of a course in opera conducting, run by the Dutch radio and television: we spent every day making mistakes with the best orchestras of the Netherlands! I learnt a lot of very practical things very quickly.

During your tenure as chief conductor of Opera North, you conducted several productions of lesser-known works, such as Franz Schreker’s Der ferne Klang, Korngold’s Violanta, and Verdi’s Jérusalem — what is your process when preparing such repertoire?

It’s a bit of a signature for me: exploring repertoire that is sometimes forgotten. I opened my tenure there with Ariane et Barbe-bleu by Dukas—a masterpiece. But preparing these rare works is just the same as preparing Verdi or Wagner: every day, every hour, trying to find your way to understanding why the composer wrote each note—a simple task but very difficult to do well! I think I manage to go a little further on a long path each time I do it, but I’m only just beginning the journey…

Conducting can often be a balancing act between psychology and communication — what elements are important to you in establishing respect and unity within your orchestra?

Your choice of words is very good: “psychology and communication”. I would say that my ideal is to give the musicians all the possibilities to realise their own best potential so that they are in charge of the music. My job is to bring something that makes all their talents and work bigger than the sum of the individual parts. It’s never a question of the chef ‘holding the keys’ or having more knowledge or power: the opposite should be true. It’s the musicians who will make the music of course, not the chef. 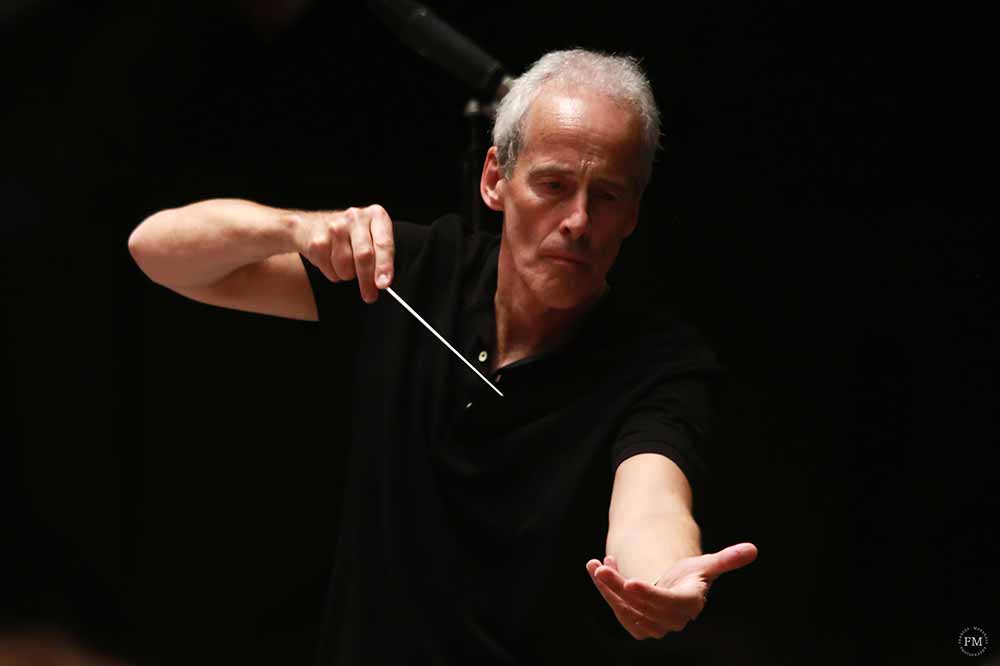 ...my job is to give them my ideas, my thoughts about the music, for them to translate into sound, at which point the chef stands aside...if you like: it's the musicians who make the music!"

How do you communicate your ideas about a work to the orchestra?

I begin with more knowledge of course—I prepare before them. They want to learn the notes, how to play them well and together…no clever ideas. Then, next, my job is to give them my ideas, my thoughts about the music, for them to translate into sound, at which point the chef stands aside…if you like: it’s the musicians who make the music!

Do you have any thoughts on the rise of the ‘player-conductor’?

It’s much more ‘authentic’ for much of the repertoire: the ‘silent’ non-playing conductor is an invention of the mid-nineteenth century, when orchestras were bigger and playing together was more difficult. For Mozart, Beethoven, Schubert, even Schumann, the idea of a ‘leader’ who did not play an instrument (usually violin or keyboard) would be very strange.

You battled through challenging times at the English National Opera — what did you take from such an experience?

That being the musical ‘boss’ must be about the music. Everything else, such as politics, administration and meetings, are all distraction. Communicating to sponsors and supporters is an essential part of the work, but only about the music and the artistic work. Others are much better than me at the other things. And during the difficult times at ENO, there was far too much of the other things. 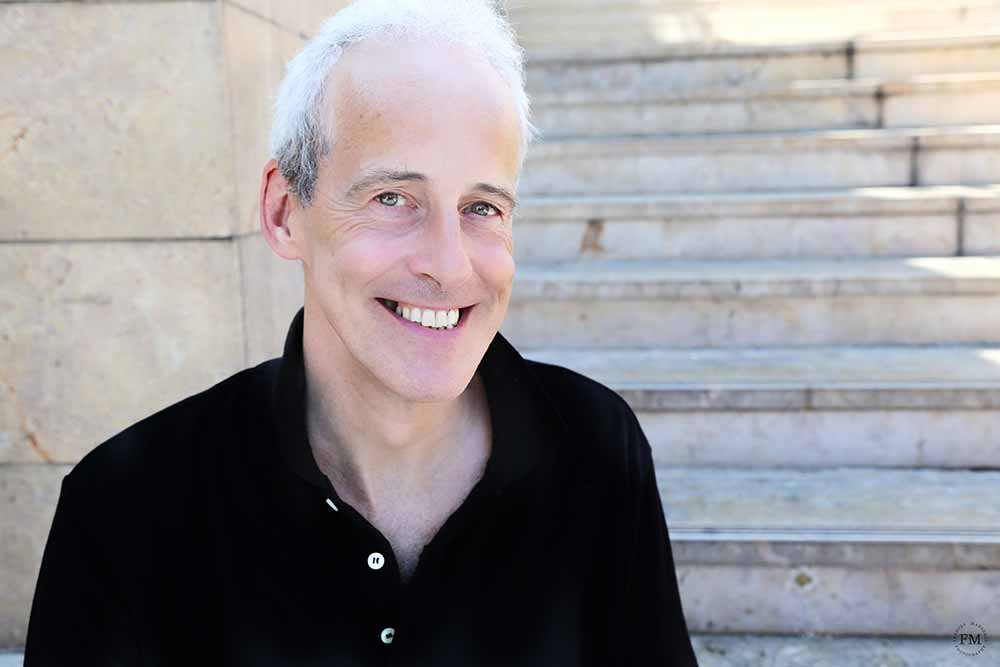 The life of a conductor can be nomadic, adventurous, turbulent and highly rewarding — how do you stay driven and motivated?

By not being too driven! By taking time to focus and relax. I’m not very good at relaxing without the music, so that’s my biggest challenge. I love the nomadic life: each orchestra or opera company, each city, has its own individual character and artistic motivation. It’s very good for an artist to experience that kind of change. Most communities are very nervous of change, but change is what drives art.

For you, how does conducting opera compare with conducting concert/symphonic repertoire — do you have a preference between the two?

I never prefer one to the other; whichever I’m doing is the best at the time! Preparing a concert programme involves taking three or four scores for five days, whereas with an opera, you take one score and develop your relationship with that one work for six weeks. So the pace and the focus are completely different.

In 1998 you received an Olivier Award for an outstanding achievement in opera, and the CBE in the 2000 New Year’s Honours list — as a musician, how did you feel about having your work recognised in such a manner?

It’s very nice that someone noticed! But two caveats: firstly, it’s recognition from one particular part of society, and I try to make my work important in all sectors of society: and secondly, the conductor is silent, so the music they all hear and enjoy is played and sung by hundreds of great singers and musicians—easy to see who the award should go to! 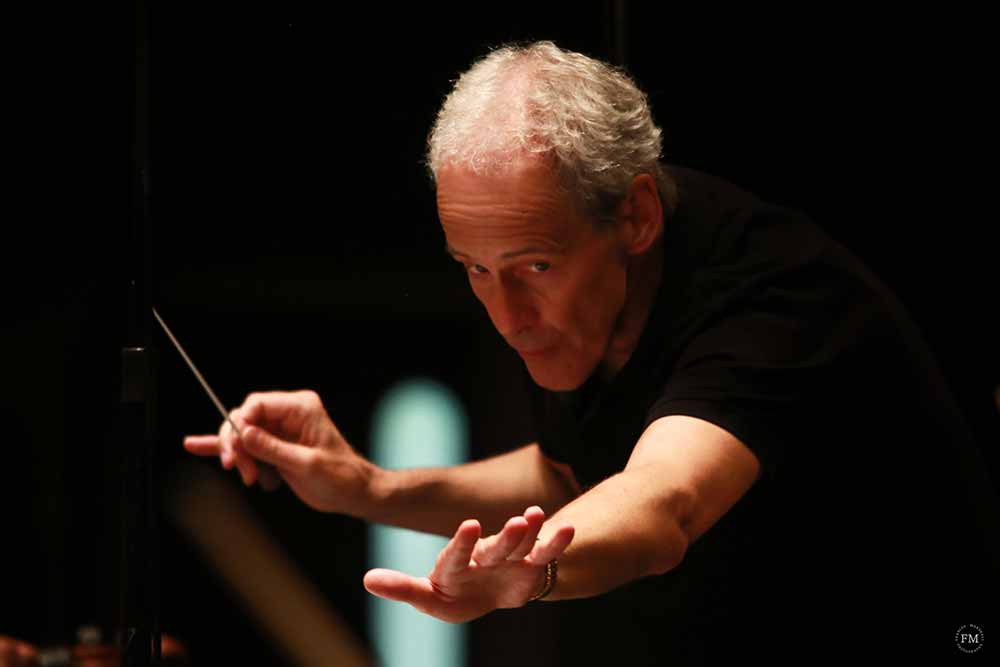 Describe the atmosphere of the BBC proms for our readers.

Very concentrated, and intimate. You can’t imagine that a hall that holds 5000, with everyone in a festive party mood, could be so concentrated and intimate when the music starts. But it is. It’s the best audience in the world.

How did the sartorial collaboration with Vivienne Westwood come about, and had you always been a fan of her designs?

I conducted a huge concert for the opening of the new millennium, starting before midnight in 1999, and ending in 2000 live from London. I think there were 2000 performers and they wanted me to wear something beautiful. I was very happy to accept…and I got to keep the jacket.

Tell us about your current work with the Orchestre National Bordeaux Aquitaine.

We have a very busy schedule, concerts, opera, often at the same time, and they play for the ballet as well. We have started a number of initiatives: a new series of recordings, a series of concerts for young people, more education work, and always, a big commitment to the whole of the Aquitaine-Girondes region.

What lies ahead for you next season?

Always new projects! Next season for me: three opera productions; around six or seven concert programmes; a tour in Spain; a visit to Paris to the new Philharmonie; and more recordings. Very busy—just how we like it!

To find out more about Paul Daniel see: www.grovesartists.com/artist/paul-daniel